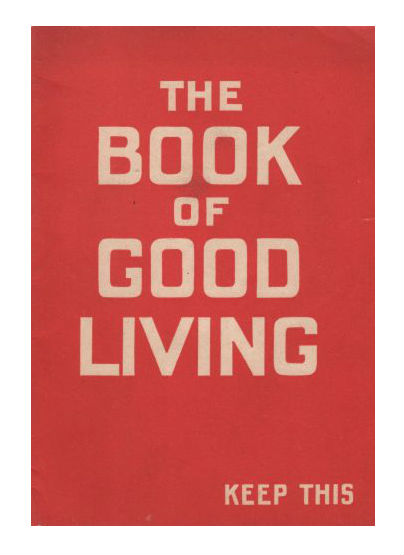 The Good Living exhibit showcases over seventy recipe pamphlets from The Culinary Institute of America’s special collection of 800 historical pamphlets housed in the Conrad N. Hilton Library.  This selection of material broadly illustrates American recipe pamphlets from the 1870s to 1970s.  The earliest shown is Mrs. Winslow’s Domestic Recipe Book for 1877 which was published by Jeremiah Curtis and John L. Brown in 1876. The pamphlet’s primary purpose was to advertise various remedies, including Mrs. Winslow’s Soothing Syrup and Brown’s Bronchial Troches.  However, a yearly calendar was printed on the first page and many recipes were alternated with textual advertisements.   Jeremiah Curtis and John L. Brown were both producers of patent medicines, which were neither patented nor medicines.  They were remedies derived from secret formulas that promised cures and improved health for those who took them.  Mrs. Winslow’s Soothing Syrup, for example, was a concoction that contained unsafe levels of morphine and alcohol.  The ad, targeted to mothers and placed next to recipes for puddings and pies, is very disturbing today.

The 1906 Pure Food and Drug Act (which became the foundation for the U. S. Food and Drug Administration) introduced for the first time federal regulations on the production of food and drugs and required admission of ingredients contained in these products. This heavily impacted the patent medicine industry.   Although the dangerousness of these products was certainly known by many by 1906, the Act itself forced many companies out of business as they could no longer rely on false advertising.

Patent medicine and tonic companies introduced the idea of including recipes along with their advertising. The food industry adopted this method and housewives of the twentieth century were presented with recipe options using brand-named products in these handy (and often free) pamphlets which were smaller and less treasured than cookbooks (and could easily fit in an apron pocket). In addition to recipes, the pamphlets played on the idea that a better way of living, whether it be for health, home, or happiness, was tied to using a particular product (an approach we know too well from contemporary advertising).

The era of the patent medicine recipe books and almanacs came to an end, but was swiftly replaced by food companies who desperately wanted housewives to purchase their products.  The companies produced recipes that used their specific brand thereby not only telling women that they should use those products, but showing them how to use them.  Sometimes the pamphlets were educational (as in the case of Crisco, consumers needed to be told why they should use this new product instead of the customary lard or butter) and other times they were shaming (i.e. “in order to be a good wife and mother you need to use this product!”) In addition to recipes, the companies also included hints for cooking and baking, general directions, histories of their companies, and entertaining ideas.

The Book of Good Living was printed by the J. W. Clement Company in Buffalo, New York, around the beginning of the twentieth century. It advertises Vinol, a tonic “for those who are weak, run-down from worry, overwork or illness.” Consisting primarily of cod-liver oil, Vinol was used to treat anemia.  The Book of Good Living contains recipes for a wide variety of dishes, including corn bread, waffles, tomato ketchup, candy, and vinol egg nog.  It lists “useful knowledge” about saving money, cleaning metals, and business law.  Additionally, it includes many testimonials from satisfied customers.  Mrs. Maribella in Chicago writes, “I took Vinol for a run-down condition and it helped me wonderfully and I am now well and strong and in good health.”

We chose this pamphlet to set to tone for the exhibit for three reasons. First, its title very clearly spells out the mission of these recipe pamphlets: In order to live well (to be healthy, happy, etc.), you must use this product.  Secondly, it asserts that it be saved (“Keep this”).  These pamphlets were often free and were frequently discarded.  Thankfully for us, some people did hold onto them and they remained in good enough condition that we are able to examine them today.  And thirdly, the messages in this pamphlet along with most of the others shown in this exhibit were directed toward women.

Recipe pamphlets differed from the advertising found in magazines and on posters because they not only told consumers to use a given product, but they also showed people (primarily women) how to use the product by giving them general instructions, advice, and recipes.